40 students from Solihull schools and colleges met in the Solihull Civic Suite on 28th November for a lively debate on international climate change, and to discuss what they themselves wanted to do locally. Read an interesting summary here of what students said before and after taking part in the conference, and feedback from their teachers.

The Model Climate Conference, mirroring the annual COP25 International Climate Conference to be held in Madrid the following week, was opened by the Mayor of Solihull, Stuart Davis, and the Chief Executive of the Metropolitan Borough Council, Nick Page. 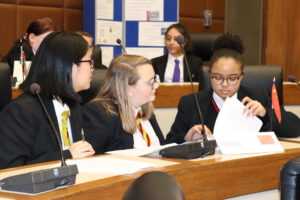 Teams presented their country’s climate change targets, explained their progress and issues, and challenged others on their performance.  Poorer countries where impact of climate change is already hitting hard stressed the importance of funding from richer countries to help adapt.  Others drew attention to the need for education and importance of communities taking a lead.  Positives were highlighted, such as how businesses around the world are responding and how new jobs are being created in renewable energy and other green sectors. 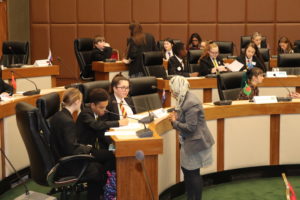 The teams then put their differences aside and engaged with each other to find areas of common ground.  They developed bilateral deals on actions to make faster progress.  That’s exactly what the planet hopes will happen at COP 25 in Madrid.

The teams then agreed one action for change that they would take back to their school.  They also considered who they should engage with to actually make things happen.