Students made climate action ‘their first and main goal’ at ICN’s Hounslow Climate Conference. Check out this great film made during the conference and here is an interesting summary of what students said before and after taking part, and feedback from their teachers.

The United States has renewed its commitment to combating climate change and sensationally re-entered the Paris Agreement.

China’s government has agreed to ban new coal mines, India has pledged to generate 60% of its electricity from renewables by 2040, while Australia has promised grants for emerging countries to invest in solar power. 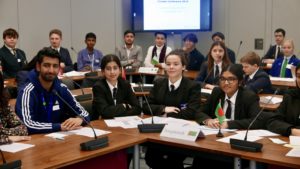 Their teams of students aged 13 to 18 took on the role of representing a national delegation at the event hosted by London Borough of Hounslow (LBH) in the Hounslow House Council Chambers, and modelled on the annual United Nations Climate Conference (COP).

“I’m here today to urge other countries in our negotiations to put climate change as their first and main goal,” said Ibrahim, one of 80 young people participating.  “Countries like the UK are putting Brexit and other political issues first, but climate change affects the whole world, not just one country.”

Over the course of the day, Ibrahim and his fellow students made speeches about how their country will be impacted by climate change and took stock of actions already taken to reduce carbon emissions. 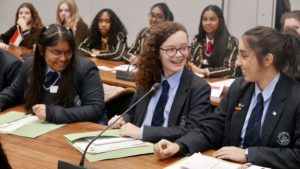 Following a round of negotiations, each team agreed on more ambitious commitments to limit global warming to the 1.5 degree target set in the 2015 Paris Agreement.

James Streeter, Chairperson of InterClimate Network, says apart from learning about the science and politics of climate change, the Model Climate Conference helps the students to develop key skills.  “The students have to take on information, speak publicly, and think on their feet. Importantly they also have to listen – that is why we call our programme Climate Voices.” 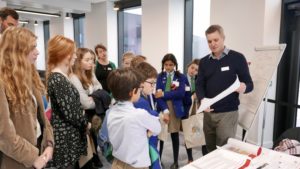 Each Climate Conference is followed by a Local Action Summit where the students meet professionals working in sustainability. Here they learn about practical climate action measures that can be taken by individuals, schools and communities – from recycling to retrofitting buildings with insulation.

Students said that it was a great boost to meet these organisations and see local responses to the climate emergency in action, as well as to share their own ideas to make a difference in school.   There were some very practical plans generated for climate action in each school, detailed here, and these will be followed up in 2020.All schools were afterwards individually congratulated by Hounslow’s Director of Education and Early Intervention for their students’ contributions to the conference.

“It was really inspiring,” said Aisha, one of the students who participated. “I would really encourage young people to join a climate conference – or any conference – to help to boost their confidence.”

Stephen Corps, Head of Geography at Springwest Academy in Feltham said : “I really wanted to get my students involved because they learn about climate change as part of their GCSEs. Events like these really stick in their memory. It’s something they can use for their exam and use in the future.

“Most of my friends don’t know know that much about what’s happening with climate change,” commented Karviya, another student. “After today I will actually go and tell my friends.”

And a final word from Councillor Katherine Dunne, Hounslow Council’s Cabinet Member for Communities and Workforce: “No one better understands the seriousness of the climate emergency than the young people who will be left to deal with the growing environmental challenges we face.

“The level of intelligent debate at the climate change conference was astounding. It was obvious that the students had thoroughly researched their allocated country and they put across their arguments in a passionate and educated way, and a number of local actions were going to be taken back to their schools.

“I felt immensely proud at their efforts and hopeful that their determination will be the driving force we need to really make an impact on the effects of global warming as we move towards the start of a new decade.”

The Conferences and follow-up activities are part of ICN’s Climate Voices Programme supported by Joseph Rowntree Charitable Trust and Garfield Weston Foundation.  Additional funding specifically to enable our activities in Hounslow has been provided jointly by the SEGRO Community Fund, managed by the London Community Foundation, and the #iwill Fund. The #iwill Fund is a joint initiative of the National Lottery Community Fund and DCMS.