St Mary Redcliffe and Temple School in Bristol is leading the way on climate action. Since 2019, InterClimate Network has worked in partnership with climate leaders (teachers and students) at the school to support climate action initiatives. In this article, Rachel Shepherd from our team explores the journey the school has been on for the last two years.

Our engagement with St Mary Redcliffe and Temple School (SMRT) picked up after Anita Molnar, a teacher from SMRT, brought a group of students to the 2019 Climate Conference in Bristol Council Chambers. The feedback we had from them was very positive.  They were also keen to follow up with organisations they had met in the ‘ideas marketplace’ part of the conference, particularly Bristol Food Network, Centre for Sustainable Energy and EarthWatch.

The Eco Club and Recycling Team were already well established in the school (run by Anita and Helen Clapson) and my subsequent communications with Anita revealed many schoolwide initiatives they were involved in organising.

After the Conference, the attendees wrote about their experience for their school newsletter:

Last Wednesday a group of six year 11’s and five year 10’s went to the council chambers to participate in a youth climate conference and to learn more about how we can make an impact in our local community. Our school was given Japan to represent. So we researched beforehand their steps to try and meet their climate goals to allow us to prepare a short opening speech and then participated in a whole room debate with the twenty other countries on several topics such as who was doing enough to meet their goals and what we can do to push our own goals. We also worked on forming collaborations on protecting the oceans and creating innovative cities. Thank you for all your help in organising this.

It was fun and I enjoyed meeting other schools in the deals section. Seeing ideas about local actions for schools, as well as learning about other countries and their efforts to help climate change was very enjoyable. Would do it again next year if I got the option to. Also helped my communication and organisation skills.

InterClimate Network’s relationship with SMRT was forged. In May 2020, Anita agreed to help with the development of our Climate Action Survey, and students were asked to comment on the draft survey. Shortly after, Anita responded enthusiastically to our request to run the Climate Action Survey pilot in school.  After liaising with the Senior Leadership Team (SLT) and Head of Geography, it was decided that the Survey would be given to every student in the school led by Geographers and supported by the Eco Club.

Ten Year 9 students led the survey in November 2020 with a deadline of 1st December for completion. I liked this incentive identified in the Climate Action Survey planning sheet:

Last year we got 7000 posh pens full of ink (as we are a drop of point for broken pens with Terracycle). So they can be used before disposing, kids can get a nice pen [if they complete the survey].

Students leading on the Survey

Some students completed the survey in class. Many were sent the survey digitally so they all didn’t get to use the posh pens (hopefully, put to another use).

SMRT delivered 634 responses. No mean feat during such a tumultuous school year. Cecily from our team sent Anita a ‘sneak preview’ of the results in January 2021. Anita was very keen to share this with her students and with schools in further lockdown, she forwarded the results via email.  Anita was in school supporting keyworker children and informed me that they had started acting according to the ‘sneak preview’ as they couldn’t wait. They had a Teams meeting with one of the SLT reflecting on the (not final) results. These were the outcomes:

The final version of the Climate Action Survey analysis was shared with the school in February 2021. They featured in the school newsletter, bulletin and were also sent home by school comms. The PowerPoint version was planned to be used for a virtual assembly.

Cecily from our team set up a Jamboard template for SMRT and in March, with the students now back in school, we proposed the idea of them creating a Jamboard to reflect on their experience of doing the survey and to share what they had done, so far, as a result. I, finally, met with them via Zoom in May and some of the students contributed to the Jamboard. Some of their reflections:

The next step of a Climate Action workshop was proposed but did not happen. I did meet with Anita on Zoom in July 2021 and we had a good conversation. SMRT students had completed the Climate Framework in Action worksheet and Anita, impressed with the graphs provided by Cecily in the appendix, printed them out and gave to Department Leaders, the SLT and some Year 9 students (noting that if she had sent it via email, it likely wouldn’t have been read).

I got an insight into the additional challenges facing teachers and students during these times. The bubble system meant year groups couldn’t be mixed and clubs such as the Eco Club were not running. It was also the assessment period making staff and students even more worn down. The group of Year 9s I met on Zoom were ‘raked’ together by Anita and were on their half hour lunchbreak. All credit to her and them, she has endeavoured to continue a lunchtime meet up once a week during this period.

During the last term, great actions have still been going on at SMRT including the Big Pedal which saw 61% of the school community coming by bike or on foot. Anita’s way of overcoming the hurdles and organising has been to target different year groups with different tasks: Year 11 weeding and tree-planting during double PE, Year 9 running the Climate Action survey, Year 8 watering and potting plants and being involved in the interview process of recruiting a new premises manager, Year 7 pen recycling with Terracycle. In July, students from SMRT joined an event on College Green run by the Young Christian Climate Network.

Anita has also joined the training session for the International Climate Action Network (I-CAN) project supported by Erasmus+, an initiative we’re participating in to give teachers the skills, confidence and framework to enable pupils to become effective critical thinking collaborators and active climate conscious citizens.

For me, this is a real success story. Climate action at SMRT has not been put on hold during the pandemic. Of course, every school needs an Anita. She is passionate and driven, unstoppable. The Eco Club are a real agent for change. Vitally, this motivated team are well supported by the staff and SLT and I believe, sustainability is woven into the school ethos. It is great that we can support them on their journey. 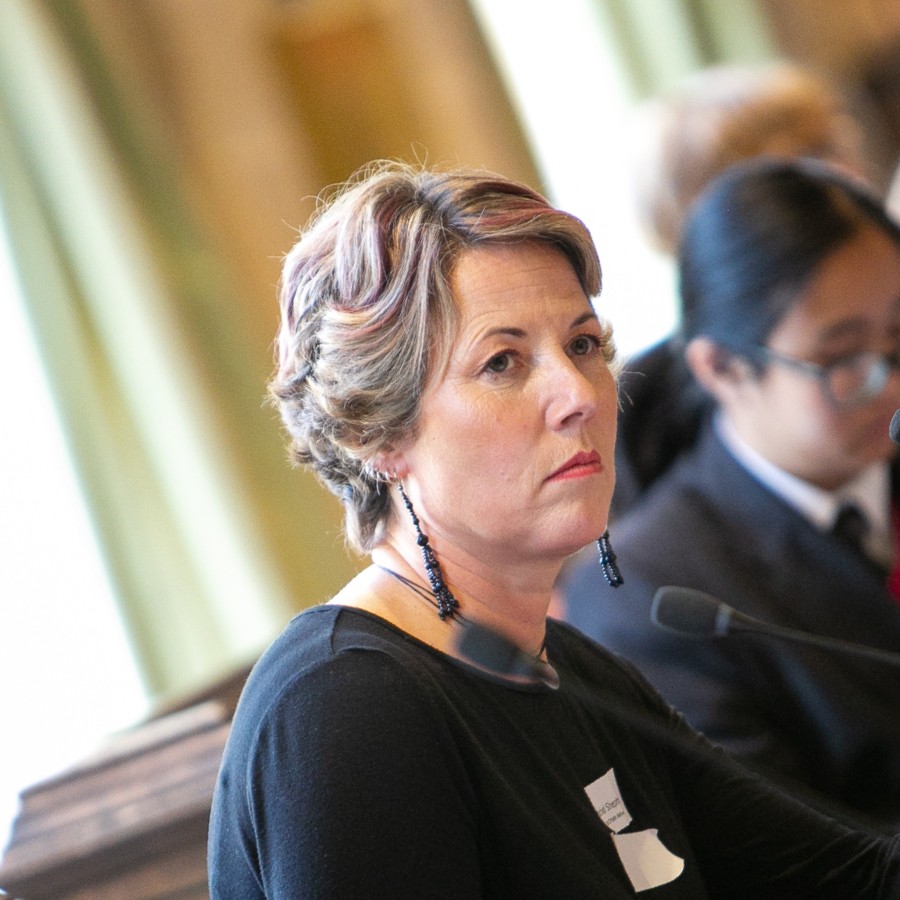 Rachel is an Associate at InterClimate Network, supporting the delivery of our Climate Voices programme through work with schools and partners.