58 students from Gloucestershire schools* were hosted by Cheltenham Council in their Chambers on 26th November for a lively and very well-informed debate on international climate change, alongside developing ideas on what they themselves can do locally. Read an interesting summary here of what students said before and after taking part, and feedback from their teachers.

The event modelled on the United Nations Climate Conference in Madrid (COP25) was opened by the Mayor of Cheltenham, Councillor Roger Whyborn. The Deputy Chief Executive of Cheltenham Borough Council, Tim Atkins gave an opening speech and said:

“To change important issues we must influence others, and sometimes this requires us to lead by example. This might be individually or as a group, challenging the norm and thinking how to do things differently.  For the Council, having declared a Climate Emergency we want to know how we can support you and what difference we can make together.” 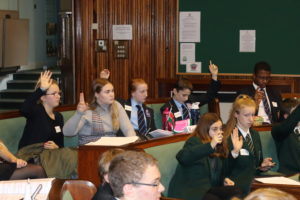 Students took on the role of government negotiators, representing 12 countries such as the UK and USA, as well as small and vulnerable countries like Fiji and Kenya. Teams presented their country’s climate change targets followed by a unanimous vote that sufficient progress was not being made on emission targets. This set the scene for a heated debate, with rich countries in particular coming under pressure to do more.  Points ranged from China pointing out how many products they manufacture for the rest of the world to Kenya’s concern that every tree that’s cut down through illegal logging will contribute to climate change.

Implementing the much-needed environmental transformations without addressing all the other social challenges that the countries face was crucial to the discussions, with economic obstacles at the heart. This came to a head when Brazil did not vote to raise its ambitions, even beyond its current targets, due to financial difficulties. On a more positive note Chile led the way stating they were implementing a national education programme to change attitudes. 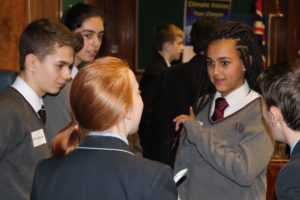 The teams then tried to put their differences aside and engaged with each other to find areas of common ground.  They developed imaginative bilateral deals on actions that would take things forward more quickly. Exactly what the planet needs. 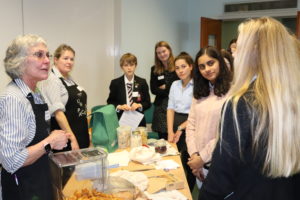 Having found out why international climate change is a ‘wicked problem’ the students focussed on how they themselves can help.  They discussed with local experts** how Gloucestershire should address the climate emergency and what they can do in their schools and lives generally. Ideas ranged from putting a tax on local businesses using single use plastics to promoting a more socially responsible mindset in schools.

The teams from each school agreed one action for change that they would take back to their school.  Importantly they also decided who they would have to discuss the proposal with to make things happen.  It’ll be good to catch up in 2020 and see how they are getting on.

‘All students fed back very positively and are eager to attend next year!’

The Conference and follow-up activities are part of ICN’s Climate Voices Programme supported by Joseph Rowntree Charitable Trust and Garfield Weston Foundation.  Additional funding specifically to enable our activities in Cheltenham has been provided by the Summerfield Trust and Ethical Giving. Thanks also to Waitrose for providing the students’ snack.