Electric vehicles are on the rise. What’s driving this change and why can we be so confident that such a dominant industry and technology as the fossil fuel car is coming to an end? And what does the shift mean for young people?

If there is one symbol that best defines the fossil fuel age it must surely be the car. Looking around our streets today it is hard to imagine a world without the internal combustion engine (ICE). Indeed, emissions from transportation have continued to rise in most countries since the first UN climate treaty was signed in 1992. In the UK last year, transportation accounted for nearly 30% of all CO2 emissions, with road transport making up the large majority.[1]

But change is afoot. An electro-mobility revolution is under way and the end of the ICE car is nearer than you might think. In fact, today’s school pupils are set to be the last generation to experience the fossil fuel car age. For those youngsters just starting school, few, if any, will own or even drive an ICE car, unless of course it is at some vintage car rally!

So what’s driving this change and why can we be so confident that such a dominant industry and technology is coming to an end?

Part of the credit for the transformation underway must go to the now legendary Elon Musk and Tesla. Almost single-handedly they have reset expectations of, and attitudes toward, electric cars. Ten years ago, EVs were considered a fringe technology, mainly of interest to environmentalists or excited futurists. Today, Tesla is one of the world’s largest companies, worth more than then next six auto-manufacturers combined and the producer of the most desirable mass-produced cars on the planet!

But there is another, largely unsung, hero in the story: government policy. Generous grants in various countries helped Tesla and other early manufacturers of EVs, like Renault-Nissan, offset the initial high development costs of these vehicles. More recently, countries have also started to introduce stricter fuel and CO2 efficiency standards for car makers, which has provided a powerful incentive to build EVs. The requirement to meet the EU’s current CO2 standard, for example was the key reason that many new EV models hit the market from 2019, leading to record sales across Europe. The UK, the Netherlands, France and other countries have also set phase-out dates for the sale of ICE vehicles, with 2030 the target date in the UK.

The changes that have been seen in just the last 2-3 years have surprised many, but this is just the beginning. All new technologies, from the printing press 500 years ago to the computer and mobile phone today, go through an adoption process call an ‘S-curve’. This starts slowly with growth that appears to be insignificant until a critical point is reached when exponential expansion occurs. Eventually, the market matures, and the rate of growth slows again, leaving a new technology dominate. For those companies that don’t react in time, the outcome is often referred to as a ‘Kodak moment’ in the business community – and not for good reasons.

What excites – and rather uniquely unites – many in the climate and car communities, is that EVs are very close to the critical mass adoption point. Already, the total cost of owning an EV can be cheaper than an ICE equivalent vehicle and by 2025 at the latest, the upfront purchase price is expected to be lower.  A tipping point for adoption is close.

For climate optimists like me, the EV revolution will help ensure the world achieves its critical climate goals of halving emissions this decade and achieving net zero emissions by 2050. For those still at school today, it offers an exciting STEM career path. For all of us, it promises healthier streets and cities and the end to a 19th century technology that has had its day. 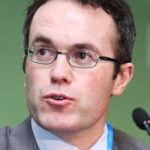 Damian is a board trustee at InterClimate Network. Damian has covered climate policy issues in Europe, the US, China and India.